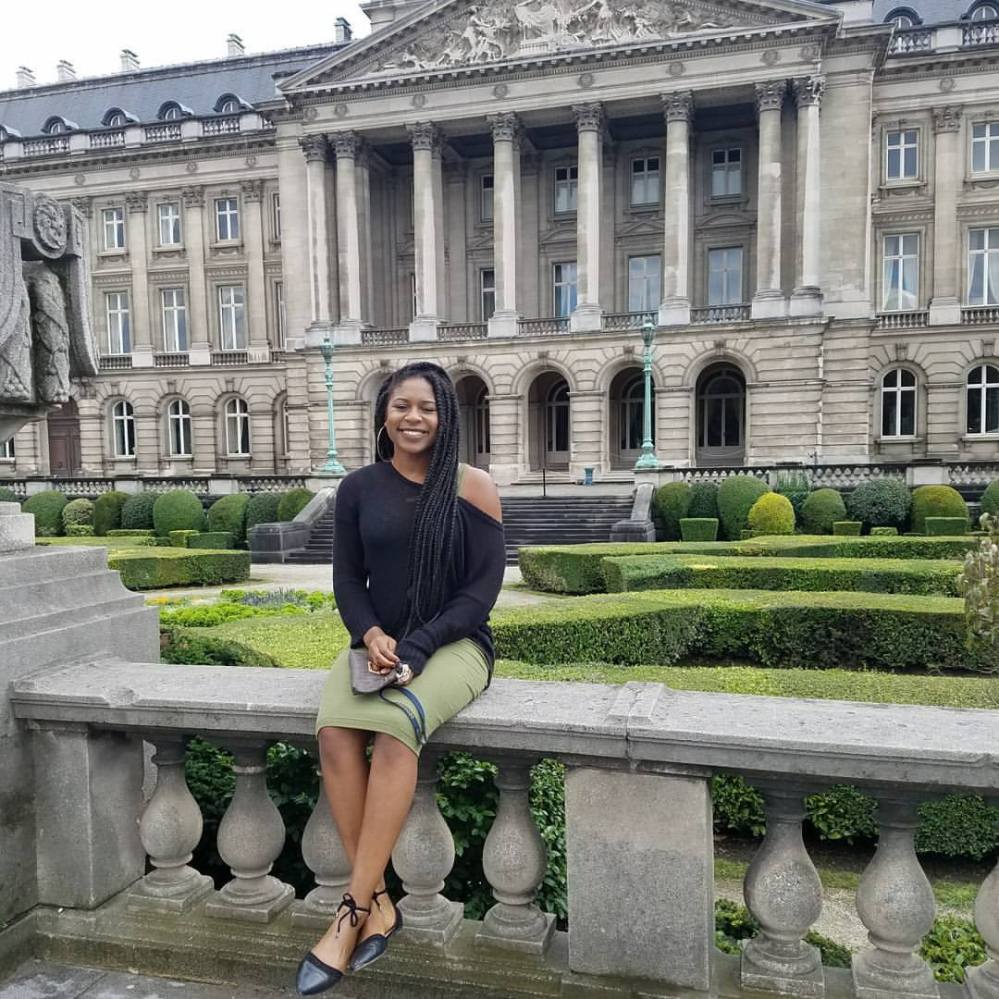 The number 1 question I’ve received over the past few months/year is
“How did you set up this opportunity to move abroad?”

I had no idea how to get abroad. I didn’t have the slightest clue where to start.

One thing that I knew for sure was that I didn’t have the financial resources to backpack across Europe for the summer, let alone for the year. I also knew that my STEM education was a certified avenue for getting abroad.

And let me just add… no, the average person cannot just pick up, quit their job or whatever, and go and figure it out. When you have bills, student loans, and other (financial) obligations, unless you have some serious generational wealth stacked sky high, moving to Europe *and living comfortably* costs a LOT of money. So this is my (somewhat) practical answer – and yes – it involves being a scientist and winning two prestigious research fellowships. My way probably doesn’t suit the average person either, but there is a method to the madness. I do believe that where there’s a will, there’s a way. You have to figure out how YOUR talents can work for you. Being a scientist is like being a superhero, you really can do anything.

Half way through my Master’s program I planned to take the Summer off before starting my Ph.D. program. I could defend my thesis in April and matriculate into my Ph.D. program in September. For those that don’t work in a research lab, you don’t get summers off. That’s not a thing. In fact, it’s the opposite. Summer is supposed to be the most productive time of the year.

Then I thought to myself, why stop at a summer break? Why not take the whole year off before committing myself to another 3-5 years in a Ph.D. program? Speaking with several colleagues, graduate students, and post-docs, almost every single one of them told me they wished they had taken a break between programs, careers, etc. I could see in their hearts that if they had the chance, they wouldn’t miss a beat to take a break. I’m not saying that’s the case for everyone nor that everyone needs a break, but for myself, the unplanned breaks between my programs were all blessings in disguise.

By the end of the first year of my Master’s program, the seed was planted. I started asking myself, how can I take 1 year off after school? Even better, what if I went abroad during that year? Who’s gonna pay for this? What jobs can I get abroad with an M.S. in Molecular, Cellular, and Developmental Biology (MCDB)? I didn’t want to be tied to an academic program to receive funding. Let’s face it, there’s a certain freedom that comes with not having to follow a structured curriculum when you’re an independent researcher. I knew that my goal was possible, but HOW SWAY?

My first stop was the career center on campus. I scheduled an advising appointment, brought an updated resume, and told the career counselor exactly what I wanted. “I’ll have an M.S. in MCDB, I’d like to live in Europe for a year, preferably doing something related to my field. If I could secure a paid research position in preparation for a Ph.D. program that would be ideal, but moving abroad is the priority and I’m open to other fields…like consulting?”

I didn’t (and still don’t) know the first thing about consulting, outside of what my friends had told me, but I knew it was a job that required a lot of travel and I figured I could find a consulting job abroad. The career counselor gave me some tips for my resume, advice on applying for jobs; it turns out that many consulting firms start heavily recruiting in August. Her last piece of advice was to visit the International Institute at the University of Michigan (U of M). She explained that they would have more knowledge about international fellowships and other opportunities abroad. She also mentioned that I speak with admissions directors and ask them what kind of things students do during their gap year. (As an aside, this is excellent advice. Obviously I didn’t plan on being shiftless in Europe for a year, but it’s important that you’re able to explain any time off in your graduate applications. If I graduate with an M.S. in 2017 and start my Ph.D. program in 2020, they’re going to want to know what I did during those 3 years).

On a whim, I went over to the International Institute and made my way to an office focused on education abroad. To be honest, I don’t remember exactly where I went. My goal was to get information and find someone to direct me to the right resources. I went to the front desk, it seemed like a place where you needed appointments but I tried anyway. The receptionist popped his head into someone’s office and that person (Bill) just so happened to have time to meet with me. So I told him exactly what I told the career counselor and that’s when he gave me a list of international fellowships that I should look into, including the Fulbright.

At the time, I had never heard of the Fulbright scholarship, and I knew nothing about it’s prestige nor how competitive it was.

Pause…let’s talk about how competitive this grant is. Let’s just say some of the most supportive people in my life hit me with a blank stare like “Bih…do you know what a Fulbright is? If you win a Fulbright you’re basically set for life. Nobel prize winners have Fulbrights.” Okay…they didn’t say it like that… they were definitely supportive but also being realistic about the expectations of winning the grant. People congratulated me for making it to semi-finals as if I had won a thousand dollars…and that’s without even winning anything. In hindsight, I’m glad I didn’t know how competitive it was because I probably wouldn’t have applied. I say all of this to encourage you to GO FOR IT, whatever it is, give it your best, and believe in yourself. Sometimes we get in the way of our own success. You are capable, you are qualified, and you can do this.

Play. Bill explained the fellowship to me in a super chill manner. “It’s a grant that provides funding for you to teach or do research anywhere in the world. I thought to myself, “Oh my God… this is perfect. This is exactly what I’m looking for!” This was literally what I’d been explaining to my friends and family, and here it was perfectly packaged into this seemingly simple fellowship.

I can write a separate post about how I prepared my application, but from that point on I focused all of my efforts towards making the most competitive application possible. I spoke with a good friend and post-doc in my lab about wanting to move abroad and she suggested that I talk to our Principal Investigator (PI – aka our boss). I was nervous about saying what I wanted out loud. I wasn’t sure if what I was asking for was reasonable, feasible, doable, you name it. (Obviously it was very reasonable, feasible, and doable since I’m writing this post in Brussels doing exactly what I said I wanted to do ;0).

After I set my heart on the Fulbright I set up a meeting with my PI, once again explaining what I wanted to do and why I wanted to go, and he was completely supportive and gave me a list of potential mentors abroad that he had connections with. I chose a mentor, he introduced us via e-mail, and we set up an informal Skype interview (it wasn’t really an interview…I think he just wanted to make sure I wasn’t a psychopath and could actually do and discuss science), and he agreed to support my application and my mission!

I officially had my affiliate! (For the Fulbright – you need a letter of affiliation which states that you have a contact at a University in your country of interest willing to support your research proposal. Again…I can touch on this in another post).

My affiliate then introduced me to the Belgian American Educational Foundation (BAEF) fellowship. We both had the same goal, getting me into his lab in Brussels by any means necessary. That meant applying to as many funding sources as possible. With or without the Fulbright, I was going to Belgium!

The rest was history! *Insert a lot of hard work, anxiety, excitement, nervousness, and pure joy* I won both fellowships and began preparing to move to Brussels! Ahhhh.

I’m not going to make any posts about my beliefs. I don’t identify with any one religion. I believe in God and I believe all religions lead to the same path. The way that things worked out so perfectly is magical. I know that was the Spirit of God, Universe Juice, whatever you want to call it, that unlimited, boundless power, working through my human body.

Oh…and the man Bill who introduced me to the Fulbright super casually. He retired from his position shortly after our visit. I tried to send him an e-mail thanking him for telling me about the Fulbright and got an automatic reply about his retirement. It’s as if he was my guardian Fulbright angel. Divine timing.

That’s all I’m gonna say about that! Take it or leave it.